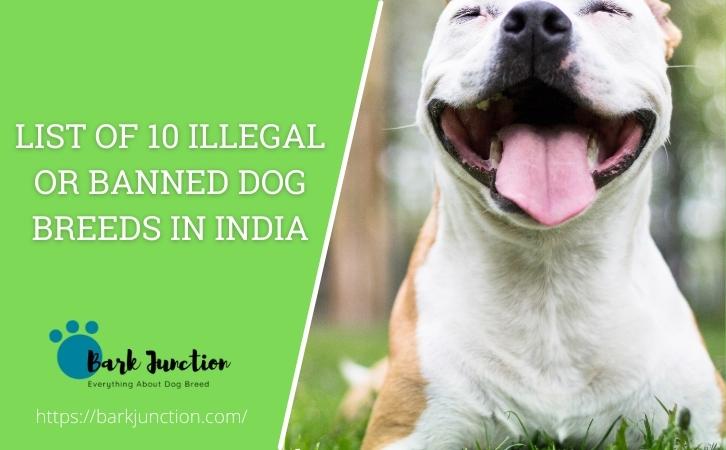 Several dog breeds are banned in India. This is because they are considered to be dangerous and can be a threat to public safety. Some of the banned breeds include the American Pit Bull Terrier, the Boerboel, and the Fila Brasileiro Dog.

There are several reasons why these breeds are banned. For one, they are known to be aggressive and can be a danger to the public. They can also be difficult to control and may cause harm to other people or animals.

Additionally, these breeds often require a lot of exercise and attention, which many people in India may not be able to provide.

What is the cost of the Banned Dog Breeds In India?

The Cost of the Banned Dog Breeds In India is:

Boerboel is a large, Mastiff-type dog that was bred in South Africa for use as a working dog on farms. This breed is now banned in India, as the Indian government has deemed it too dangerous.

The Boerboel is a powerful dog with a naturally aggressive temperament. They are also very resistant to pain, making them particularly dangerous in a fight.

The Boerboel has been responsible for a number of fatal attacks on humans in India, and as such, is now prohibited from being imported or bred in the country.

The Dogo Argentino is a breed of dog that is banned in India. This breed is highly aggressive and dangerous and tends to attack other animals and people.

In fact, the Dogo Argentino is so dangerous that it has been banned in several countries worldwide.

Although Dogo Argentino is banned in India, some people still own this breed of dog.

The Fila Brasileiro, also known as the Brazilian Mastiff, is a large dog breed that is banned in India. This breed is very strong and protective, and it has been banned in India due to its aggressive behavior.

The Fila Brasileiro is not allowed in India because it is considered a dangerous dog breed. It can be tough to control.

The Tosa Inu, a Japanese dog breed, is banned in India. This breed is known for being aggressive and powerful and has been involved in many attacks on humans.

As a result, the Indian government has banned the import, export, and sale of this breed.

The Presa Canario is a breed of dog that is banned in India. This breed is considered to be dangerous and aggressive, and it is therefore prohibited in India.

The Presa Canario is a large dog that is typically used for guarding and protection. They are known for their strong build and fierce demeanor.

The American bulldog is a breed of dog banned in India. This breed is banned because it is considered to be a dangerous breed.

The American bulldog is a muscular, stocky dog that is bred for bull-baiting and dog fighting.

This breed is also aggressive and has been responsible for many attacks on people.

The Neapolitan mastiff is a banned dog breed in India. This breed is known for being aggressive and dangerous, and for this reason, it is prohibited in India.

The Neapolitan mastiff has been involved in several attacks in the country, and as a result, the breed has been banned.

There are a number of dog breeds that are banned in India. The Wolfdog is one of them.

This breed of dog is a mix of a wolf and a domestic dog. They are considered to be aggressive and dangerous and are therefore not allowed in India.

As in many other places, there are a number of dog breeds that are banned in India. This is largely because of the danger that these breeds can pose to the public. One such breed is the bandog.

The bandog is a cross between a Staffordshire bull terrier and a mastiff. It is a large, muscular dog that is bred for aggression.

It is known for its fearsome temper and can be very dangerous to people and other animals. As such, it is banned in many places, including India.

There is a ban on certain dog breeds in India. The Pitbull is one of these breeds. This ban was put into place because of the number of attacks that Pitbulls have been responsible for.

There have been cases where Pitbulls have killed people, leading to the ban.

Even though there is a ban on Pitbulls in India, many people still own these dogs. People tend to think of Pitbulls as gentle and friendly dogs.

However, the truth is that Pitbulls can be very dangerous, and this is why they are banned in India.

What dog is banned in India?

Some of the most common breeds that are banned in India include Pit Bulls, Rottweilers, Bulldogs, and German Shepherds.
There are a number of reasons why these breeds are commonly banned in India:
They are all considered to be dangerous dogs and can be very aggressive.
They are all prone to attacking humans and other animals, leading to severe injuries or even fatalities.
Many people believe that these dogs are too challenging to train and handle, resulting in them becoming a nuisance or a danger to the community.


Why is Rottweiler banned in India?

Which dog breed is illegal?

There is no easy answer to this question as different countries and even states within countries have different laws governing which dog breeds are considered illegal.
Generally, breeds that are considered to be dangerous or aggressive, such as pit bulls, Rottweilers, and German Shepherds, are the ones that are most likely to be outlawed.
However, there are exceptions, and some countries or states will outlaw any dog breed, regardless of its temperament.