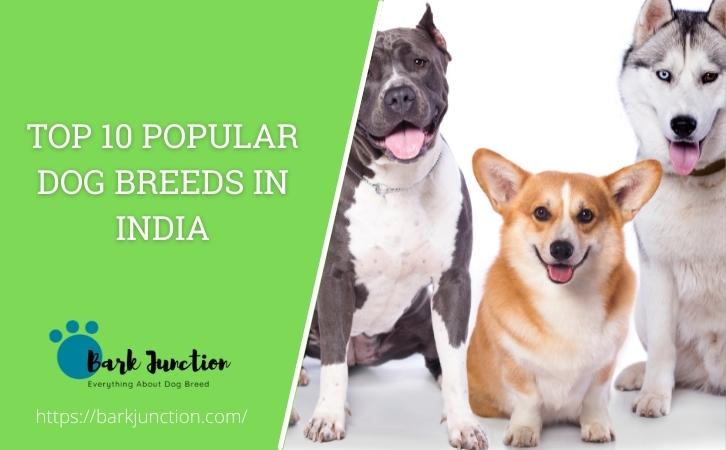 Dogs are man’s best friends. They’re loyal, they keep you company, and they always belong. However, there are some dogs that stand out more. In this blog, we’ll discuss some popular dog breeds in India! These cute and playful animals will make you the most famous person in the neighborhood.

The German Shepherd dogs are well famous for their trainability, strength, and intelligence.

There’s a reason that the Labrador Retriever has been named the most popular dog in the U.S. according to American Kennel Club statistics every year since 1991.

LABRADOR RETRIEVER – ALL About This Popular Breed video

Golden Retriever is usually outgoing, loyal, and eager to do its owner’s bidding, making it very easy to train. A healthy Golden Retriever puppy can cost you anything between Rs.20,000 to Rs.25,000 as long as you choose a reliable breeder or pet shop.

Indian Spitz is another medium-sized dog ideal for Indian households. It is a kind, intelligent, active, and athletic dog breed.

During the 1990s, Indian Spitz gained popularity in India as a ban to import dogs were in place.

Indian Spitz dog is full of energy and enthusiasm and can quickly adapt to different climates and diets. Indian Spitz packs a feisty temperament for its small size.

If you live in a small space, Indian Spitz can be an ideal pet for your house.

The Rajapalayam, also known as the Polgar Hound or Indian Ghost Hound, is one of the few bred pedigree dogs that were popularized to hunt for wild boars and other small prey. This means that its highly important to socialize a Rajapalayam early on – with both humans and other dogs.

Rottweilers are a powerful breed and well suited as guard dogs. However, a dog’s behavior is a replica of the owner, and in my opinion, Rottweilers are very lovable large dogs irrespective of their strength. Rottweiler is amongst the best breeds of dogs for families in India.

Rottweilers have a history of being exceptionally hard-working dogs. But when properly trained and socialized, Rottweilers can be quite loveable and even forget that they are entirely too big to be lap dogs. Rottweiler dogs are very loyal to their owners and make an exceptionally family-friendly dog.

Then this Breed is a perfect choice as Rottweiler is a breed renowned for its tremendous strength, has a lineage of Roman legion mastiffs. The Rottweiler dog breed is intelligent, loyal, strong, steady, alert, obedient, and courageous.

Boxer is a German breed of dog with Old English Bulldog ancestry. Known for their strength and agility, Boxers make good watchdogs for families– but don’t worry, they’re not always serious. They are called so because they use their front paw more often at play and look like a boxer. Boxer is a medium-sized, Muscular and sturdy dog from Germany. Seeing their size and built, Boxer is ideal for all households, making them one of the popular dogs for a home in India.

Boxer has almost all the qualities to be recognized as the best companion and guard dog. Boxer is easily trainable and fairly reliable with children. This dog is very kind, caring, and protects small kids as anticipated. But If needed then, Boxer can be furious and protective.

. Boxer dogs are brilliant and easily trainable. Boxer is a high-energy dog with strength and agility, making them good watchdogs.

Indian Pariah dog is one of the most primitive and ancient Indian dog breeds. Indian Pariah is a breed with its origin in India, and humans never altered this Breed for commercial purposes, so it still boasts of being one of the purest breeds of dogs.

Indian Pariah dog has erected ears and wedge-shaped head. The Indian pariah dog was one of the first dogs domesticated by human beings. This dog breed can be traced back to 15,000 years ago; in fact, the Indian Pariah dog is thought to be the oldest dog breed globally.

It’s worth noting that Indian Pariah Dogs can get bored quickly, especially with repetitive games, such as fetch. Having evolved through the generations to suit themselves to sub-continent conditions, Indian pariah dogs are least susceptible to the diseases that the pedigree often falls prey to. The Indian pariah breed, also known as the native Indian dog or Desi Breed, is an Indian subcontinent wild dog landrace.

The Indian pariah dog was one of the first dogs domesticated by human beings dating back to the Neolithic era. Indian Pariah dogs make for loving family pets and are great with kids and adults. Indian Pariah dog is also known as Desi Dog or INDogs and South Asian pye-dog.

The Indian Pariah Dogs are genetic ancestors of nearly all Indian dog breeds. The Indian Pariah dog is a native breed that emerged due to natural selection, not by purposeful breeding by humans. Even though Indian Pariah isn’t the most glamorous Breed out there, they sure are the most practical and economical choice for pets.

One of the most common hounds found in India is the Beagle. Beagle has already made its way through the small Breed in India and still finds its place in our list of best pet dogs in India. Beagle is getting a little popular in India recently. It is similar to foxhound but a smaller version of it.

Beagles are dogs that are extremely friendly and smart. Beagles are warm, calm, and intelligent, which makes them the perfect family dog.

Beagles are trail dogs owned primarily for tracking hare, rabbit, and similar small game. In our estimation, Beagle will soon be one of India’s top ten popular dogs. The best habit of a beagle is that they enjoy your company and other dog’s company a lot and are always ready to play and ready to make some noise.

This small dog breed will surely be a friendly companion, and I would like to suggest people pet Beagle as it has a more friendly attitude towards children.

Beagles are fantastic family pets, get along with children and family members, are vocal, and can alert you about strangers.

Pomeranian is a dog breed popularly acknowledged as Pom or Pom Pom, which are Spitz-type dogs related to the Pomerania region in Poland in Central Europe. It is an animated dog whose positive behavior appeals greatly to many people, making them popular dog breeds in India. Pomeranian is also very lovable in western countries, not because of his size or behavior but because of his fur. It has one of the best furs in all dog breeds. Their fur is soft and shiny, and you will love to pamper them.

Pomeranian is one of the best companions for the best small dog breeds in India, with the price being quite affordable and flexible. It doesn’t like outsiders very much and doesn’t like meeting strangers very much.

A Pomeranian can cost you between Rs.3,000 to Rs.75,000 depending on genetic superiority, personality traits, and your choice of breeders or pet shop.

In India, many popular dog breeds are used for different types of work. The dog is man’s best friend. There are several breeds of dogs in India, including one popular Breed, the Pitbull Dog.

In India, pit bull dogs were even employed in the army to serve as keen watchdogs. They are easy to train and are very strong and difficult to kill. There are over 40 dog breed types in India. However, the most popular one is a pitbull dog breed. The Pitbull has a very muscular build and can be very aggressive if provoked and trained properly but friendly if socialized well.

The BIGGEST PITBULL In The World video

Which is the No 1 dog breed in India?

Which is the best dog to keep at home in India?

The Golden Retriever is an excellent breed for families in India. They are very obedient and also smart enough to be well trained for competition purposes. Additionally, these dogs are very popular as pets, as they are great at providing companionship.

Which dog is very intelligent?

Border Collie: Border Collies are very intelligent, which allows them to solve just about any problem they are presented with.