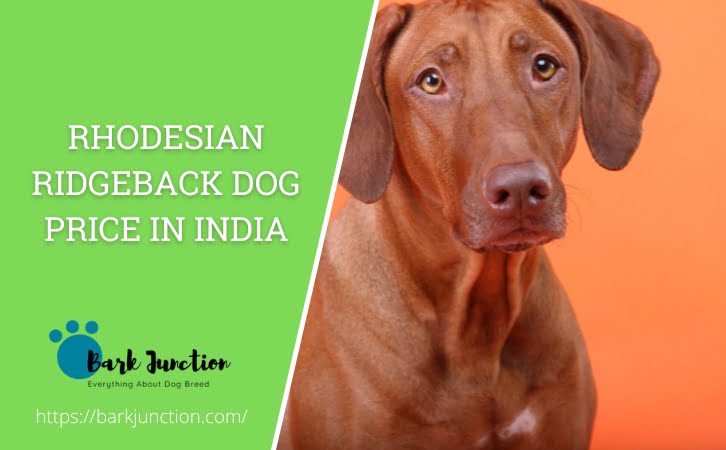 Are you looking for a loyal and protective dog to make a great addition to your family? Then you should consider getting a Rhodesian Ridgeback!

Originating from Zimbabwe, these dogs are known for their impressive hunting skills and their unique ridge of hair along their back. And while they may be on the pricier side, they’re worth it!

Depending on the length of the Rhodesian Ridgeback’s coat, the amount of time required for grooming will vary. A shorter coat will require less grooming than a longer one. The average cost to groom a Rhodesian Ridgeback dog in India is between Rs. 500 and Rs. 1,000.

Rhodesian Ridgeback training cost in India differs from place to place. It also depends on the dog’s age, size, and breed.

Puppies can be enrolled in puppy schools which help them socialize and learn basic obedience commands.

Obedience training for an adult dog would be different. It would focus on commands like sit, drop, stay, come here, etc.

Rhodesian Ridgebacks are very independent-minded dogs, so patience is the key while training them.

Ridgebacks are relatively healthy dogs, but like all breeds, they are susceptible to specific health conditions. Be aware of these conditions, and consult your veterinarian if your dog is affected. Some common health problems in Ridgebacks include hip dysplasia, elbow dysplasia, von Willebrand’s disease, and hypothyroidism.

The Rhodesian Ridgeback is a large dog, weighing anywhere from 60 to 85 pounds. Males are typically larger than females. This breed has a life expectancy of 10 to 12 years.

Rhodesian Ridgebacks are not cheap dogs. Prices for puppies start at around rs. 40,000 and can go up to rs. 60,000 or more for show-quality dogs from reputable breeders.

If you’re looking for a Rhodesian Ridgeback on a budget, you can find one at a local shelter or rescue organization. However, it’s important to remember that adopting a dog comes with added costs like vaccinations, spaying/neutering, and microchipping that should be factored into your budget.

Are Rhodesian Ridgebacks easy to train?

Rhodesian Ridgebacks are considered a challenging breed to train. They have a reputation for being stubborn and independent, which can challenge basic obedience training.

However, most Ridgebacks will eventually learn the basics with patience and consistency. Remember that this is a hunting dog breed, so their instinct is to chase prey. This instinct can make recall training particularly difficult.

As with all dog breeds, early socialization is essential for Rhodesian Ridgebacks. They need exposure to different people, places, and experiences when they are young to ensure they grow up to be well-rounded adults.

Though Rhodesian Ridgebacks are not aggressive by nature, they have a strong prey drive and may give chase to small animals that run.

They need firm, consistent training and socialization from a young age to learn not to be aggressive, and even then, some may never be trustworthy around other animals.

A Rhodesian Ridgeback is probably not the best choice if you are looking for a dog who will get along with other pets in your home.

Rhodesian Ridgebacks make great indoor dogs because of their relaxed and versatile nature. They love spending time with their family and adapting to different environments and situations.

They can be calm and relaxed indoors or active and playful if given the opportunity. Rhodesian Ridgebacks are also generally good with other home pets, including dogs, cats, and even small children.

Rhodesian Ridgebacks are not high-maintenance dogs. They are medium-energy dogs that require regular exercise but do not need to be exercised for long periods. They are also not difficult to train and are generally good-natured dogs.

How many colors do Rhodesian Ridgebacks come in?

Rhodesian Ridgebacks come in various colors, including black, brown, and red. They can also have white markings on their chest and toes.

Is a Rhodesian Ridgeback good for first-time owners?

The Rhodesian Ridgeback is not recommended for first-time dog owners. These dogs need experienced owners who are confident and firm in their leadership.

They are also best suited to homes with plenty of space for them to roam and play. If you are considering getting a Rhodesian Ridgeback, do your research first and be prepared to put in the time and effort required to train and care for one of these dogs.

Do Rhodesian Ridgeback bark a lot?

Rhodesian Ridgebacks are not known for being barkers, but they will bark when they feel it is necessary. They are a very loyal breed of dog and often bark when they sense someone or something suspicious.

Is Rhodesian Ridgeback available in India?

Yes, Rhodesian Ridgebacks are available in India. However, they are not as common as other dog breeds. The average price for a Rhodesian Ridgeback Dog in India is around 30,000 INR. The Kennel Club of India (KCI) does not recognize this breed.

Is a Rhodesian Ridgeback a good pet?

A Rhodesian Ridgeback is a good pet for those who are looking for a loyal and protective companion. They are known for their intelligence and trainability and make excellent guard dogs. They are also relatively easy to care for, and their short coats require little grooming.
However, they are large dogs and need plenty of exercise, so they are not a good fit for families with small children or apartments. They can also be quite stubborn and headstrong, so patience and consistency are key when training them. Rhodesian Ridgebacks are also relatively expensive, so be prepared to budget for their food, vet care, and other supplies.

Which is the most friendly dog?